Rhythm has always been a quintessential facet of Carnatic music, and in the modern generation of percussionists, perhaps no other individual has mastered the intricacies and the laya endowments of the ghatam to such a great degree as Sri Thetakudi Harihara Vinayakram. T.H. Vinayakram, affectionately known as Vikku, has transformed himself into an international celebrity with his imaginative and beautiful drumming on the ghatam.

The ghatam, a very ancient percussion instrument of South India, is a mud pot with a narrow mouth. From this narrow mouth, it shapes itself outwards to form a ridge. Primarily made of clay fired with brass or copper filings with some small amount of iron filings, the ghatam's size varies according to pitch. In addition the pitch can be altered to a small degree by the application of plasticine, clay or water. The ghatam is placed on the lap of the performer, with the instrument's mouth facing the belly. The artiste uses his fingers (including thumbs), his palms, and occasionally, even the fingernails to produce various sounds. Sometimes, the ghatam is turned around so that the mouth faces the audience, and the player is able to play more readily on the neck of the instrument. 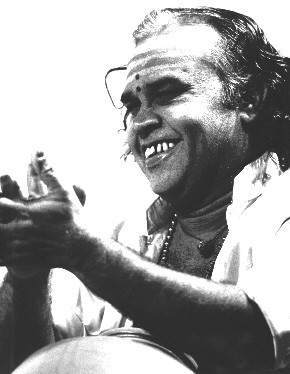 Son of the noted and talented musician and percussionist, Kalaimamani T.R. Harihara Sharma, who among other things, played on the mridangam, morsingh, and the gettuvadhyam (the only stringed instrument used for percussion resembling the fretless veena, often employed by the famous Kanchipuram Naina Pillai (1889-1934) as an accompanying instrument), Vinayakram was a child prodigy. He started his concert career at the tender age of thirteen. A doyen of South Indian percussion, not only has he demonstrated his amazing dexterity in accompanying the great stalwarts of yesteryear and recent times - Semmangudi Srinivasa Iyer, G.N. Balasubramaniam, Madurai Mani Iyer, M.S. Subbulakshmi, and Maharajapuram Santhanam - but he has also displayed his creative and improvisatory genius in playing mind boggling rhythms for various fusion groups, such as Shakti and J.G. Laya. On the Carnatic music platform Vikku is renowned for his crisp play and deep knowledge of rhythm. He majestically finishes many a tani avartanam by throwing his ghatam in the air and catching it without missing a beat.

Vinayakram first became known in the West in the mid 1970s as a member of the group Shakti, which consisted of the jazz guitarist John McLaughlin, violinist L. Shankar, tabla virtuoso Zakir Hussain, and Vikku. The extraordinary speed and precision of his duets with Zakir Hussain captivated international audiences. Vikku once commented on the brilliance of this fusion group:

It is universally acknowledged that Shakti's music is unique. In this group I played ghatam. Many of the compositions performed in this group were inspired by traditional Indian ragas, which resulted in grand appreciation from Indians, as well as audiences in the West. Only through this group did I have the new experience of entering the world of fusion music, and I think we were able to exhibit and develop our individual talents to the maximum extent possible. This liberty given to the artist resulted in achieving the fullest coordination and success in the group. Shakti, being the predecessor of many and various contemporary bands, could hence be termed the 'Godfather' of fusion music."

Vinayakram has also performed with J.G. Laya, an experimental group which includes pianists and other percussionists.

Having traveled all over the world, with exposure to various forms of music and teaching experience both in India and the United States (Vinayakram was with the Centre for World Music (Berkeley, California) for some time), Vikku is an international musician in every sense of the word. As a master of ceremonies once uttered prior to a concert in Toronto, Canada in 1993:

'Mr. Vinayakram is a jet-setter; day before yesterday he was performing in Madras, and a week before he was in Germany, and then tomorrow he is going back to London, starting a tour on the seventh, coming back on the tenth to Cleveland, and going back to Germany on the fourteenth....'

Vinayakram has a number of titles and awards to his name, including: "Astana Vidhwan" of Kanchi Kama Koti Peetam, "Ghatam Nagamani" given by Sri Sri Sri Jayendra Saraswathi, "Kalaimamini" given by the government of Tamil Nadu, India, and the First Sangeeth Natak Academy award for ghatam in 1988.

In addition to these attainments, Vinayakram became the first South Indian artist to ever receive a Grammy Award in 1991 for Best World Music Album for his participation in Mickey Hart's "Planet Drum" in which he played ghatam and morsingh. It is noteworthy that Vinayakram donated all of the royalties he received from this Grammy Award to Kanchi Kama Koti Peetam. In addition, Vinayakram was a nominee for the 38th Annual Grammy Awards for Best World Music Album for his participation in 'Raga Aberi' along with L. Shankar on the ten string double violin and Zakir Hussain on the tabla (the piece on this album is a Ragam-Tanam-Pallavi in Raga Aberi set in a tala cycle of 4 3/4 beats). Vinayakram is also noted for his accompaniment in the first Carnatic concert given at the United Nations in New York by M. S. Subbulakshmi in 1966. Currently, T.H. Vinayakram is the principal of his Sri Jaya Ganesha Thala Vadya Vidyalaya Percussion School in Madras.

Vinayakram's younger brother and my guru, T.H. Subash Chandran, also an accomplished ghatam artiste, is perhaps the greatest modern day exponent of "konnakol." This verbal utterance of the rhythmic syllables is an art that is becoming dangerously close to obsolete. T.H. Subash Chandran is keeping alive an art that has had such illustrious practitioners as Pakkiriah Pillai and Vellore Gopalachari (father of current day mridangmist Vellore Ramabhadran).

Vinayakram has two sons who are currently making names for themselves in the field of Carnatic percussion, namely, the elder V. Selvaganesh and the younger T.H.V. Umashankar. Unlike his father, however, Selvaganesh's chosen instrument is the khanjira - the South Indian version of the tambourine. Umashankar has taken up his father's instrument, the ghatam. Both being popular accompanists, they are currently accompanying a number of Carnatic musicians in concerts in India.

Currently, Vinayakram has two albums of his on the market. One, entitled "Thala Vadya Katchery", is a masterful gathering of violin, konnakol, mridangam, khanjira, ghatam, morsingh, and dholak. The album is conducted by Vinayakram and assisted by T.H. Subash Chandran. Another album, entitled "Swara Laya Mela," presented by Vinayakram and coordinated by Subash Chandran, is a rendering by the Sri Sri Maha Periyava Group. This group contains a number of young and experienced instrumentalists, and the album contains compositions which are swara representations of jathis, which have been set to tune in various ragas to result in sublime music. Other albums of Vinayakram include "Together", a gathering of Vinayakram along with both of his sons, and "Moon Over the Isles", an assembly of various percussionists from Vinayakram's school. Another album of Vinayakram which is expected to arrive on the market soon is entitled "Generations" and involves Vinayakram, Subash Chandran, Selvaganesh, and Umashankar; one especially unique song on that album is a piece involving three ghatams set at different pitches, played by Vinayakram, Subash Chandran, and Umashankar. Vinaykram has also published two books: 'Art of Mridangam' in English and 'Mridanga Pada Bhodhini' in Tamil.

All that can be said when this listener thinks about the music and rhythms produced by Vikku are the epithetical utterances of "saabash" and "ballay" which Vikku himself says repeatedly on the concert platform.