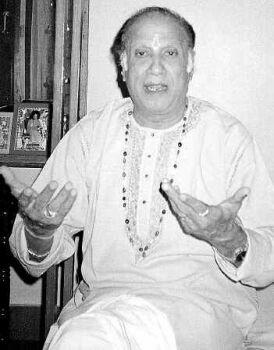 HE SITS cross-legged on the single bed mattress of Janardhana Hotel, that favourite haunt of all artistes in Bangalore. Hair oiled and combed down below the ears. Zari dhothi. Silk jibba. A beaded japamala from the Kanchi Matham. A gold ring with a large green emerald from Satya Sai Baba. An altogether colourful personality with a magnificent presence. Who makes no bones about the fact that the three artistes whom he admires most and respects are all women! Apart from his mother, ("I owe much to her") and wife, Charumathi, whose creativity never fails to surprise him. "Would you believe it?" he exclaims, with childlike enthusiasm.

"M. S. Subbulakshmi and D. K. Pattamal sang `Sita Kalyana Vaibhogame' during the `Oonjal' ceremony of my wedding? And, my own guru, M. L. Vasanthakumari, sang at the evening reception. What more can anyone ask for?" Trichur Ramachandran, recipient of Padma Bhushan as his 20th award, lives up to his own belief that a classical musician should cultivate the two essential qualities of a commanding stage presence and a rich voice. Bothof which, he has in plenty. "They mean nothing unless accompanied by real bhakthi," he adds. I understood what he meant when I heard him pray that same evening on a music platform in the famed Sri Rama Seva Mandali at Chamarajapet - that hallowed meeting ground of all the greats of Carnatic music.

His beloved guru, who is remembered often by this devoted pupil, possessed all these qualities, in addition to a charismatic personality. G. N. Balasubramaniam, who was literally hero worshipped by his fans in the 1940s, was a charmer who had a lovely voice to match his rare musical abilities. He was Ramachandran's mentor in whose footsteps the latter has carefully walked.

As eminent dancer V. P. Dhananjayan put it: "Trichur Ramachandran is a good bridge between the older generation and younger audiences. Without compromising his music, and without deviating from the classical, he is able to cater to young listeners... " In fact, Ramachandran's devotion to GNB comes through his music again and again. If you had listened with closed eyes to "Himagiri Thanaye..." you would have thought that it was GNB singing his favourite lyric all over again! "After my graduation, my mother (whose family had a musical tradition) took me to this eminent musician," he recalls. "She told him I was interested in music, and wondered whether I could become his pupil". The vidwan turned to the young boy, and asked him to sing. Ramachandran had already had a long tutelage with gurus like Varkala Subramania Bhagavatar and Tripunithura Krishna Iyer. He sang a few lyrics easily. The only comment from the great man was: "Let him come to me from tomorrow!" He told him later, "You came at the right time," and taught him all the nuances of classical music.

"It is from this guru that I learnt about the aesthetics of music. Its imagination and creativity." GNB, who was also a scholar in English Literature - in addition to his flair for music and acting (remember the charming Dushyantha singing his melodies in the film Shakuntalai?) - was an exemplary teacher who never forced his views on his pupils and yet coaxed them into the inimitable GNB style of singing - a judicious mix of conservatism with appropriate innovations. No wonder Ramachandran opted to come under the tutelage of M. L. Vasanthakumari after his guru died. He refused to desert the bani into which he had been groomed. In fact, he remains true to all the precepts of his great teachers. "We should popularise our musicians in the North," he declares. Did not GNB invite Bade Ghulam Ali to come and perform for South Indian audiences? Again, parochialism must end if music must survive, according to this votary of liberal attitudes in music. "Kerala made a mark on Tamil Nadu through musical composers and artistes," he continues. "Just as Andhra Pradesh has contributed through great vidwans like Balamurali and Nedunuri. We should listen to eminent vidwans, no matter which school, what language. I listened to all kinds of music and all musicians of repute." Ramachandran is a versatile artiste. Among musical instruments, he respects the tambura which he feels is the most important component in a kutcheri.

Impressed with the `sruthi suddham' of Hindustani music, where "artistes spend nearly one hour adjusting the sruti before a performance," he turned to Pandit Krishnanand to learn Hindustani music. In a subdued voice, he sings, "Hari Naama Thero... " in the exotic Mian Ki Malhaar raag and proves his point about the purity of sruti.

Born in Kerala in 1940, Ramachandran grew up as a talented youngster who sang for school functions, and later represented his college in various youth festivals. His passion for music continued even as he completed his graduation in chemistry. His dilemma began when he gained admission into the Calicut Medical College ("in the second list!") as he was already learning from a great vidwan like GNB. When he asked the latter for his advice, the guru quietly answered, "It is for you to decide". The young man did. And broke the news to his mother (he did not dare to speak to his father, the Chief Justice of Kerala!) He had decided to set aside the medical seat for music. When he returned to the guru with this news, the latter simply said, "wise decision" and continued to talk about the intricacies of Carnatic music.

"I rented a small room and lived a frugal life the next few years," says Ramachandran. It was a long struggle. But then, learning music is a shiksha, according to him. "Just like learning the Vedas." It was well worth the effort. He learnt about the power of great music. And its divinity too.

From dawn till late night, master and pupil interacted in true guru-sishya style. The pupil learnt lessons not only in singing but also in consistency, perseverance and above all, in humility.

"There is no place for arrogance in music. It is a tapas!" I had a glimpse of that tapas when he sang Purandara Dasa's "Karuniso Ranga, Karuniso!" oblivious to his surroundings. He pleaded with all the fervour and devotion of that savant. I understood what his guru meant when he said: "Learn to sing for yourself and enjoy your own music first... "

(The author may be contacted at vatsalavedantam@vsnl.com)