Many strings to his artistic bow 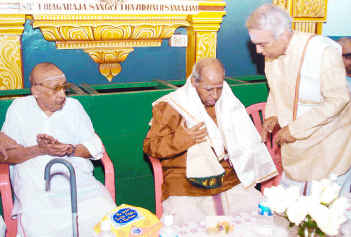 SANGEETA KALANIDHI T. M. Thiagarajan, who belongs to the prestigious stable of Semmangudi Srinivasa Iyer, is a veteran vidwan whose rare musical acumen, creative abilities, composing brilliance, teaching skills, etc, are a class apart. It has been the regret of his numerous admirers that all these attributes have not been sung adequately.

TMT, known as the preserver of the Thanjavur Music Tradition, was born on May 28, 1923, in Thanjavur and is a proud descendant of a very special musical lineage. His forefathers were experts in the field of music and dance. His great grandfather and grandfather were both Asthana vidvans of the Baroda court. Even today members of his family are in Baroda under the home `Tanjorekar.'

TMT had his novitiate under his father, Mahalingam Pillai, a leading mridangam vidwan. Later, he was privileged to benefit from the expert guidance of Sri Semmangudi. When he was six years old, Malaikottai Govindaswami Pillai, the outstanding violinist of those times, predicted a bright future for Thiagarajan and blessed him. The first concert of the boy was at Tiruvaiyaru when he was eight, and no less a stalwart than Dakshinamurthi Pillai accompanied him on the mridangam. TMT has many strings to his artistic bow, as a performer, guru, composer, tunesmith, administrator, etc. His colleagues in the Government Music College, Chennai, like the late K.V. Narayanaswami, B. Rajam Iyer, Tiruppambaram Swaminatha Pillai, S. Ramanathan, T. Brinda and others, had the greatest respect for TMT. His cerebral activity is something exceptional for in his illustrious career, he has composed, tuned and also provided rich musical gloss to rare kritis of lesser known composers such as Chengalvaraya Sastri, Ramaswami Sivan, Annayya, Periasami Thooran and the songs of Vallalar Ramalinga Swamigal, Thayumanavar, Ganapathi Satchidananda Swami, Guru Surajananda, Andal's Tiruppavai and Manickavasagar's Thiruvembavai with notation. He has also published other songs that are a gift to posterity. Various cultural institutions like the Teacher's College of the Music Academy, Chennai and the Annamalai University, Chidambaram, Madurai Music College, have had the privilege of having TMT adorning the faculties. TMT's music being an extension of tradition, judiciously and beautifully blended with pertinent innovations. His individualistic style of singing in terms of raga alapana, niraval, swaraprastharas and rendering of pallavis conceived brilliantly, have all made him the role model for many aspiring youngsters. Learning from Thiagarajan is always a pleasure for his legion of students, the lessons would stimulate one's mind, his exemplary attention to lakshana and lakshya, a parental interest and affection for each one of those who came under his fold and his wit and humour would raise the spirit of the entire class. S. Prema, S. Jaya, O. S. Thyagarajan, Mangalam Shankar, Gowri Gokul, Lakshmi Rangarajan, Kuzhikkarai Viswalingam, S. Seetharaman, E. Gayatri, M. Narmada, Raji Gopalakrishnan, Nirmala Sunderarajan and Subhashini Parthasarathy are some of the torch bearers of the TMT tradition.

On the occasion of his 80th birthday, the entire fraternity of Carnatic music salutes TMT, the maestro, and wishes him more years of significant service to our precious artistic heritage. Semmangudi Srinivasa Iyer talks of Thiagarajan as a vidwan who came through as a simple human being, with a sound knowledge of the art and values based on integrity, ethics and firm convictions. His versatility, the depth of his vidwath, his guru bhakti and his sincere concern and affection for his students are the hallmarks of a true nadhopasaka. ``It was mridangam maestro Thanjavur Vaidyanatha Iyer, who sent him to me and during his stay at my house, he was more a son to my wife and myself than my own children. My wife would serve him his meal even before she served anybody else in the household. More than TMT being known as my sishya, it gives me greater happiness and pride to have the privilege of being known as his guru".

Lalgudi's tribute: ``T. M. Thiagarajan is a much-respected vidvan whose individualistic style of singing, has enthused many vidyarthis to tread the path that he has paved with great distinction. The attractive and imaginative sangathis that he sets for traditional and modern compositions have received much approbation from `saha vidwans' and the music-loving public. His kutcheris are a feast for both the mind and soul. Never one to seek name, glory and fame, he has served Carnatic music with great dignity and character".

Karaikudi Mani, mridangam maestro, says that TMT is a complete musician. His methodical development of the raga, stage by stage, the imaginative prayogas, different from the run-of-the-mill phrases, the kriti finish with beautiful sangathis in the spiralling structure, the captivating expansion of the lyrical sequence and the swara singing even in the sarva laghu mode with an unexpected dhirga swara with one or two unexpected kaarvais, would give a fillip to the exercise. His Ragam Tanam Pallavis are deceptively simple but require a lot of skill, and the light songs during the post-session of the Pallavi were imbued with aesthetics. The songs that he moulded in his own style are so attractive that other musicians even from other schools like M. L. Vasanthakumari and D. K. Jayaraman loved to sing them in all their concerts. T. M. Thiagarajan is a musician non-pareil, personification of dedication, commitment and high values and above all, one who has given greater depth and meaning to the terms - Dignity and Stateliness.

A NUMBER of musicians including the grand old doyen Sangita Kalanidhi Semmangudi Srinivasa Iyer joined to greet Sangita Kalanidhi T. M. Thyagarajan, Carnatic music titan, with enthusiasm and affection on his 80th birthday celebrated on the premises of Sri Thyagaraja Vidwat Samajam, Mylapore, Chennai, on May 28.

After the prayer song rendered by Subhiksha Rangarajan, Lakshmi Podval, the compere, the introduced the galaxy of speakers.

A purse was presented to the vidwan by his disciples. The vote of thanks presented by Latha concluded a happy function that was underlined with much respect, affection and warmth. — S. P.