To Tanjore – the cradle and nursery of Carnatic music and its masters – belongs Sri Umayalpuram K. Sivaraman, the topmost mrudangam vidwan of today. Born on 17-12-1935, he is the son of Dr P. Kasiviswanatha Iyer and Smt Kamalambal. His father, a medical practitioner and himself an accomplished musician, had with insight and intuition nurtured the inborn talents of his son and got him rightly initiated into mrudangam through the gurukula discipline under scholarly practitioners.

Shri Sivaraman learnt this divine art under four great and illustrious masters: Sri Arupathi Natesa Iyer, Sri Tanjavoor Vaidyanatha Iyer, Sri Palghat Mani Iyer, Sri Kumbakonam Rangu Iyengar. The pursuit of this art under the gurukula system for well over fifteen years did not deter him to qualify for law. He is a double graduate of The University of Madras (B.A., B.L.).

Behind the professional glory and mastery of Umayalpuram Sivaraman lies a massive substratum of toil and training. Even as a three year old kid, Sivaraman revealed his ‘laya sense’ playing his fingers on whatever objects they chanced to touch upon and producing diverse ‘talas’ and such an act fetched him the gift of a kanjira from his grandmother. As a boy of ten, Sivaraman had his ‘arangetram’ (first concert) and the debut was held in the precincts of Kalahastheeswaraswami temple in the temple town of Kumbakonam.

His new techniques, innovations and creative ability in accompaniment, solo renditions, and jugalbandhi programmes with his North Indian counterparts have earned him a special place in the world of art, worthy of emulation by other artists. Having made his debut at a tender age of ten, Sivaraman has been in the field as a ‘top notcher’ for half a century now, accompanying a galaxy of maestros of recent past and artistes of great merit today, both vocal and instrumental. 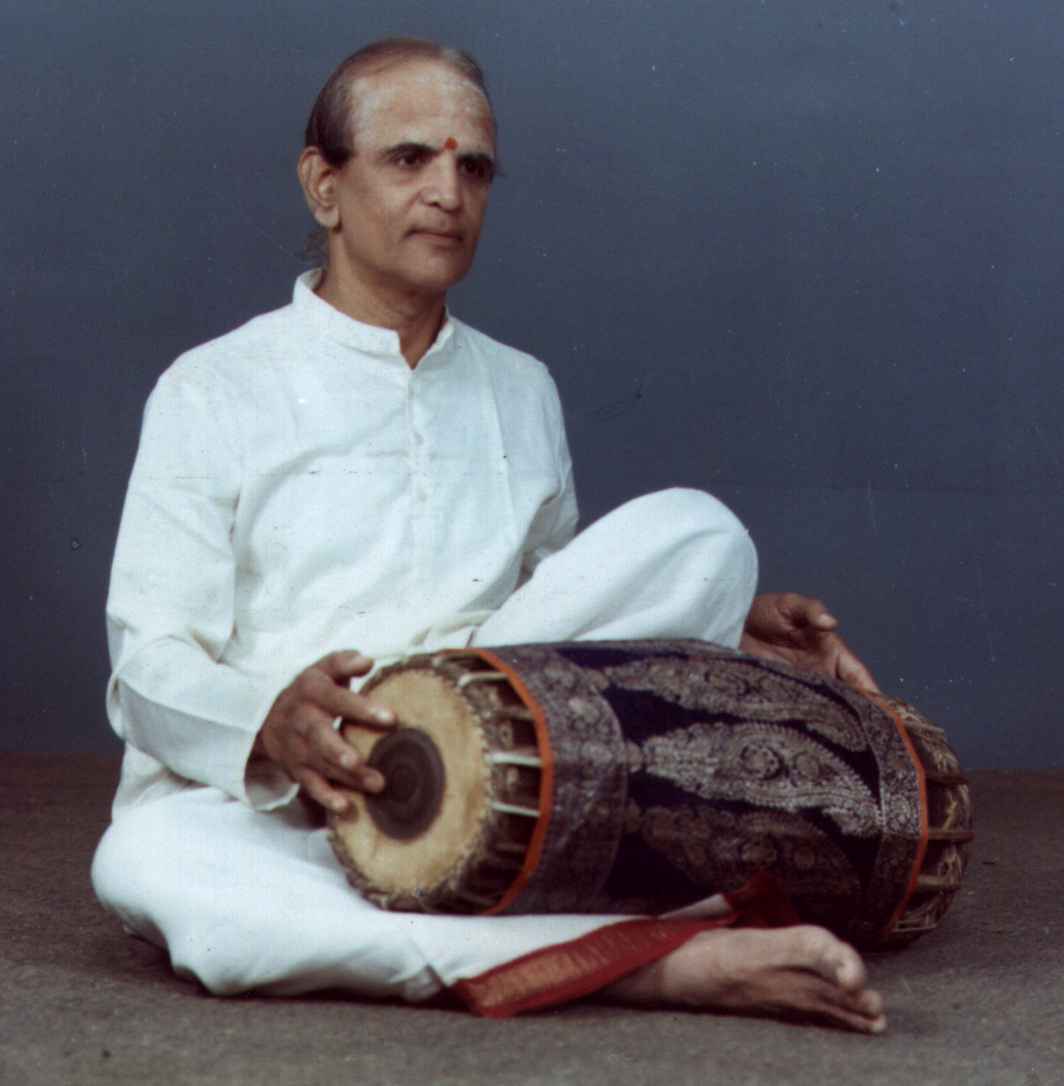 Besides his professional career, he had undertaken the very laudable task of doing original research in the art of mrudangam. This resulted in his highly acclaimed lecture demonstrations done in all important centres in India and abroad, which enabled him to disseminate knowledge of this divine art to art lovers, music conferences, music seminars and the like. He is the only mrudangam vidwan who has explored and placed before the world of art lovers authentic information on the techniques and nuances of mrudangam for more than two decades. He has introduced the fibre glass mrudangam to Carnatic music for the first time, improvised a mechanical jig to eliminate human error in the moulding of skins for both sides of the instrument and has done research work on tanned and untanned skins for the mrudangam. His analysis of the ingredients of the black patch has given much insight on the overtones produced by different strokes on the mrudangam.

Sivaraman has contributed informative articles on mrudangam in Sri Shanmukhananda Sabha's (Bombay) Journal, Bhavan's Journal; Vadya Kala - a publication of the Development Centre for Musical Instruments, Madras (Ministry of Commerce - Handicrafts, Govt. of India) and to several other journals and publications. He has played mrudangam in several professional recordings and in the special feature 'The Drums of India', in the United States. He has also planned and played in the cassette ‘Garland of Rhythm’ which has given a new dimension to the concept of thani avarthanam (mrudangam solo). He had the unique honour of playing Tala Vadya Kutcheri-s in the Annual Film Fare festival in 1973 and 1975. He also participated in the ‘Tala Vadya Utsav’ at New Delhi in 1985 and played a jugalbandhi concert. He played mrudangam in a special programme known as ‘Mrudangam Drum Set Jugalbandhi’ in Max Muller Bhavan, Madras, along with two leading drummers from West Germany. He has served as a judge in the panel constituted by the Ministry of Education and Culture, Government of India. He has served as a judge in the All India Radio panel, for selection of artistes. He was invited to play mrudangam in the popular and successful Tamil movie 'Mrudanga Chakravarthy'. Sri Sivaraman is a ‘A’ Top Grade artiste in All India Radio and Doordarshan Television. He has presided over the Annual Music Conference of the Indian Fine Arts Society, Madras, in 1984 and was conferred the title of Sangeetha Kala Sikhamani. Sri Sivaraman has been appointed as the Director for ‘Tanjore Vaidyanatha Iyer School for Percussion’ recently started by the Music Academy, Madras.

His innovations include analysis of the ingredients of the black patch on the right side of the mrudangam, on the overtones produced from the right side drum head, synthesis of the traditional and the modern approaches in playing on the instrument, research in using tanned and untanned skins and hides of the instrument, evolving new patterns of rhythmic designs (mora-s and korvai-s), has improvised and is using a mechanical contrivance to eliminate human error in the moulding skins for mrudangam on both sides and he has made a fibre glass mrudangam and used it in concerts.

He has gone abroad several times on concert tours and special programmes. He has visited the USSR, USA, Canada, UK, France, West Germany, East Germany, Poland, Malaysia, Singapore, Japan, Indonesia, Bangkok, Ceylon, Muscat, Bahrain, Australia, etc. In his visit to the U.K., he participated in the Tala Vadya Kutcheri for the Festival of India, 1982, and again for the same festival in New York and Washington D.C., U.S.A., in 1985. He has also been invited to perform concerts and jazz concerts in Sri Lanka and Belgium.

Several honours and titles were bestowed on Sivaraman for his great services to this divine art. He was conferred the award ‘Padmashri’ by the Government of India in 1988. He received Sangeet Natak Akademi award for mrudangam for the year 1992. He was conferred Kalaimamani, awarded by the Iyal Isai Nataka Mandram of Tamilnadu. He had been appointed ‘State Artiste’ of the Government of Tamil Nadu from 1981 for a period of six years. His Holiness Sri Sankaracharya Swamigal has appointed Sri Sivaraman as ‘Asthana Vidwan’ of Shri Kanchi Sankara Mutt. His Holiness Shri Sankaracharya Swamigal of Shri Sharada Peetam Sringeri has bestowed on Sivaraman the title of Mrudanga Kalanidhi and has appointed him as ‘Asthana Vidwan’ of Shri Sarada Peetam, Sringeri. His titles include Laya Jyothi, Laya Gnana Bhaskara, Sangeetha Kala Sikhamani, Mrudanga Nadamani (bestowed by His Holiness Shri Sankaracharya of Kanchi Mutt), Mrudanga Chakravarthi', Nada Sudharnava, Tal Vilas, and Laya Gnana Tilaka, etc. Several Lions and Rotary Clubs have honoured Sivaraman for his unique services to Carnatic music. He has trained many Indian and foreign students in the art of mrudangam and continues training more disciples.

He has been working for the upkeep of the traditional way of playing without sacrificing the modern impact, greater understanding, and wide appreciation for the instrument, dedication to the art of mrudangam, its propagation, and scientific improvisations in the construction of mrudangam. His mrudangam playing is considered to be in a class of its own, winning critical acclaim from the top-most musicians and music lovers.

The Indian Press has showered unqualified and highly appreciative tribute and laudation on Sivaraman whenever and wherever he got involved in concerts and other programmes. Presented below is an abridged collection of excerpts from our leading dailies.

"Umayalpuram Sivaraman embellished the concert from the word 'go' and sparkled through with strokes of great virtuosity and melody." Indian Express, Bombay.

"The mellifluous mrudangam artistry with which Umayalpuram Sivaraman heightened the natural rhythmic liveliness and gait of the alternating swara movements by the singer and violinist in the Natabhairavi song acquired a range of breath-taking beauty in the superb thani which followed. It was feast of tonal richness and polished rhythmic virtuosity. His support of the music generally was delicately chiselled and marked often by a concealed sense of drama. Whenever the performance tended to slip to dullness, Sivaraman interfered and jacked it with his rousing rhythm. The 'thani' was exciting with arithmetical bouts". The Hindu, Madras.

"Sivaraman's mrudangam playing was a treat. The closeness with which he follows both the temper and tempo of the music is something that makes him a unique mrudangist." The Statesman, New Delhi.

"Sivaraman played in majestic style and drew out the best from the main performer." Deccan Chronicle, Hyderabad.

"The felicitous and fluent expressions in English coupled with his mastery of the mrudangam enabled him to show the Westerners the scope and range of the instrument" From a Bangalore newspaper.

"Exhibiting a captivating range of rhythmic artistry with his customary poise, mrudangist Sivaraman was particularly scintillating in his imaginative pauses during the music and thrusts during its silences. His tani after Shri Jalantara was thrilling". The Hindu 11-12-1981.

"Umayalpuram Sivaraman compelled the listener to watch every move of his superlative artistry which included surprises like the underplayed and delicate finale where one expected lightning and thunder." The Hindu 1-1-1982.

"One would not get over the feeling that the real leadership of the concert has passed to Umayalpuram Sivaraman. He gave his best to elevate its aesthetic content. In fact, it sounded as though he was providing the third veena. The thani he supplemented was an example for original ideas in sparkling melody.". Star Of Mysore 17-10-83.

"The sensitivity of the performance was heightened by the silken collaboration of mrudangist Umayalpuram Sivaraman. It was low-key in tone but high-pitched in artistry and converted percussion art into a velvety cushion for the music to comfortably recline upon. His thani too was a distinctive essay in muted mridangam excellence. The lovely phases of his ‘teka’ style support for Samajavara gamana frequently brought to mind thoughts of the excellence of the North Indian tabla." The Hindu, 7-7-84.

"Sivaraman, after Palghat Mani Iyer, the lion of percussion, is considered the most outstanding exponent of this instrument. His playing creates the impression or illusion of a stringed instrument, so tuneful are his strokes. Next, his clarity of utterance. Every stroke, fast or even breezy, comes out crystal clear - a gift very few others have. In the concert under review, he raised the Kanda beat of five to the power of N and executed pithy patterns that sent the audience into raptures.

While accompanying he followed the vocalist like a shadow and greatly embellished the recital. In the solo bout, he excelled himself and without trying to be technical. One would like to sum up his playing by noting that he operated on the least common multiple formula through which he made the khanda five-beat cycle assume other cycles and arrive at the starting point with astounding clarity. Truly, a giant of percussion." The Statesman, Delhi 22-3-85.

"The mridangam ‘top-notcher’ Umayalpuram Sivaraman has the aplomb and artistry that provides what may be called the ‘Sivaraman-effect’, which denotes success and grandeur to any concert he is associated with. The ‘khanda-gati’ patterns subtly handled in his thani were erudite, precise and consummate phrases in rhythm." The Times of India 5-2-85.

"There have been giants like Tanjore Vaidyanatha Iyer, Palghat Mani Iyer, Azhaghanambia Pillai in the past who handled this instrument with great dexterity. But Umayalpuram Sivaraman has beaten all past records by developing the mrudangam into a class by itself. He has almost codified the patterns and evolved a method by which all possible combinations have been worked out and perfected. That is why he is the first preference to all musicians.

The Asia Society, New York arranged a coast-to-coast tour in the States in 1962 where he popularised the mridangam so much so, that many foreigners evinced interest in it and have become his students.

After Palghat Mani Iyer, the lion of percussion, he is today the most outstanding mridangist. In jugalbandhi-s with great tabalchees of the Hindustani style he has come out in flying colours." Subbudu in NOW Magazine, August 1985.

Go back to The Carnatic Music Reference Library