Remembering the Pitāmaha of Carnatic Music
by Mohan Ayyar

There is something special in his music that made his concerts so appealing to many generations of Carnatic music lovers. It is exhilarating and uplifting music that takes the listener beyond the stresses and strains of modern life. The exuberance and vitality mixed with the sincere bhakti of his presentation gives the listener the feeling that he too is enjoying the music. Perhaps this was the secret to his success.

The musician referred to is none other than the great Sri Semmangudi R. Srinivasa Iyer. This year marks the 100th Birth Anniversary of one of Carnatic musics legends.  His music and style, still available to us through audio and video recordings, is an inspiration to the younger generation of artistes. This article is a tribute to the pitāmaha (grandfather) of Carnatic music. 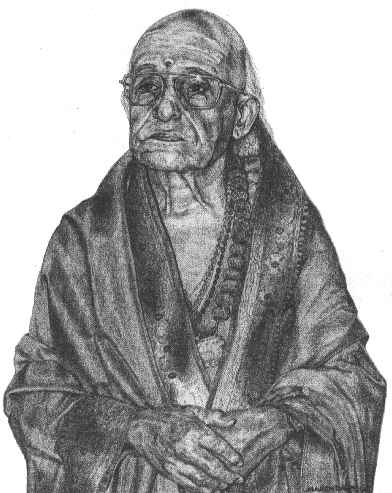 Srinivasa Iyer was born in a Vāthima Smārta Brahmin family as the third son of Radhakrishna Iyer and Dharmasamvardhini Ammal. Born on 25th July 1908, he grew up in the village of Semmangudi which is in the cradle of Carnatic music, Tanjāvur District, South India. Without doubt, this little village is now world renowned due to Srinivasa Iyer. From the age of 5, the young lad showed an aptitude and interest in music. The success in the field of music by Dharmasamvardhinis brother, Tirukodikāval Krishna Iyer (one of the first successful Carnatic musicians who played violin), and her nephew Narayanaswami Iyer, led Radhakrishna Iyer to decide that music would be a good career for his son. Hence from the age of nine, Srinivasa Iyer started receiving music training.

Semmangudi (as Srinivasa Iyer is commonly referred to as) had the opportunity to learn music under four distinguished musical stalwarts. He started his musical training in 1917 (on the auspicious Vijayadasami day) with his cousin-brother, Semmangudi Narayanaswami Iyer, who was a violinist. Later he had the opportunity to study music with the eminent gottuvadhyam artiste, Sakharama Rao, and also vocalist Sangeetha Kalānidhi Umayalpuram Swaminatha Iyer. The latter had learnt music from direct disciples of Thyagaraja. Finally, Semmangudi had training from the acclaimed vocalist, Sangeetha Kalānidhi Maharajapuram Viswanatha Iyer, also a disciple of Swaminatha Iyer. Semmangudi had the chance to provide vocal support to Viswanatha Iyer in several concerts. The style of tuition, under each of his four gurus, always in the gurukula tradition (where the student lived with the teacher), ensured the best environment to learn music.

During this time, Semmangudi also had many opportunities to listen to concerts by eminent musicians such as Ariyakudi Ramanuja Iyengar, Chembai Vaidhyanatha Iyer, Kanchipuram Naina Pillai and flute maestro, Palladam Sanjeeva Rao. He was also influenced by the quality nāgaswara music of T. N. Rajaratnam Pillai and Karukurichi Arunachalam, who often performed in temple festivals.

In his teens, Semmangudis voice had cracked and had lost the musical texture present in his childhood. Some people suggested that he might switch over to the violin but Semmangudi was determined to be a vocalist and followed a rigorous training schedule that involved singing for several hours continuously. By his eighteenth year his voice had somewhat mellowed and in 1926 (the same year of his marriage to Thayammal) he was given the opportunity to present a solo concert at the Nāgeswaraswāmi temple in Kumbakonam. There were not many people in the audience but an auspicious downpour of rain began soon after the concert commenced. Soon his fame began to spread throughout the region and by the following year he had an opportunity to sing in Madras. Semmangudis rise to fame was quite meteoric. In the late 1930s he was considered as one of the front line vocalists of the period and in 1947, the Music Academy of Madras awarded him the title Sangeetha Kalānidhi. Aged 39, he was the youngest artiste to receive the award and he still remains the youngest person ever to get this prestigious recognition.

During his illustrious career, Semmangudi held many notable positions. In 1939 he was made Asthāna Vidwān (resident musician) of the Travancore Palace in Kerala and joined the Swāti Tirunal Music Academy in Trivandrum in 1941. He soon became the Principal of this institution and was there till 1963. From the period 1956-59, taking a leave of absence from the Academy, he also served as Chief Producer of Carnatic Music at All India Music, Madras.

Part of his role at the Swāti Tirunal Academy was to revive the compositions of Maharāja Swāti Tirunal. For many of the compositions, the text was available but there was no indication about the tune. Semmangudi, along with Harikesanallur Muthiah Bhagavathar and others were given the task to set music to the Maharājas lyrics. Semmangudi has brought out two publications which give the notation to over 200 of Swati Tirunals compositions. Furthermore, he tried to include at least two Swati Tirunal compositions in each of his concerts. Déva Déva (Māyamālavagowla), Pankajalochana (Kalyāni), Vishwéshwara (Sindhu Bhairavi) and Bhavayāmi Raghurāmam (Rāgamalika) are some of the Maharajahs compositions that were both tuned and popularised by him. The latter, a description of the epic Rāmāyana, was originally entirely set in Sāveri rāga but Semmangudi transformed it into a rāgamālika (beginning with Sāvéri) and added a scintillating set of chitta-swarams. Semmangudi has also tuned a number of Sadāsiva Brahmendra compositions such as Bhajare yadunātham (Pilu), Bruhi mukundeti (Kurinji), Gāyati Vanamāli (Misra Kāpi) and Sarvam brahmamayam (Senjurutti).

Semmangudi has large set of prominent disciples, some of whom did gurukulavāsam, others whom he taught while at the Swati Tirunal Academy and others who took casual lessons with him. His prominent disciples include two Sangeetha Kalānidhi-s: Prof. T. N. Krishnan (who accompanied him on violin in many concerts) and T. M. Thiagarajan. Disciple P. S. Narayanaswamy is a well respected musician and mentor to some of the stars of the current generation. Kallidakurichi S. Harihara Iyer had a long association with Semmangudi and also became the Principal of the Swati Tirunal Academy. K. R Kedaranathan is a senior disciple who later became a Professor at the Chembai Music College. Other notable disciples include Palai C. K. Ramachandran, V. Subrahmaniam, Neyatinkara Vasudevan, Trivandram R. S. Mani, Vaigal Gnanaskandan, Parasala Ponnammal and K. Omanakutty. M. S. Subbulakshmi and K. J. Yesudas (a Music College disciple) have also learnt many compositions from Semmangudi. T. M. Krishna had the fortune to receive advanced tuition under Semmangudi for over seven years.

It is interesting to note that later in his career, Semmangudi himself learnt certain compositions from notable musicians such as Ariyakudi, T. Brinda and G. N. Balasubramaniam.  He has also learnt to play the veena, which has helped his knowledge of handling gamaka-s and rāga lakshana.

Facets of his music

The music of Semmangudi has a certain magnetism about it. Despite his nasal voice, it is inspiring music that gives the listeners an impression that they too are involved in it. It is imaginative, expressive and extroverted yet sublime. S. V. Seshadri writes Semmangudi has no equal in bringing out the bhāva of a kriti. He communicates the feeling and emotion of the sāhitya with an intensity that has the imprimatur of a personal faith. That is why his music is not merely brilliant but devout and moving. In his concerts, he generally has concentrated on krithi-s, neraval and swaram singing rather than elaborate rāga ālāpana-s, which are generally neat and succinct. His exuberant singing of adjacent swara-s in rapid succession is prominent element of his unique style. His disciple, V. Subrahmaniam notes

His style is based on strict adherence to the sarvalaghu basic rhythm. The swara-s that he renders in the slow tempo would abound in the bhāva of the rāga with all the nuances, gamaka-s and anuswaras. His fast tempo rendition of swaras would rush as the flow of the Ganga in Haridwar, the fastness in no way marring the melody of the bhava-laden rāga packing the fast tempo swara-s with speed, clarity, bhava and easy flow. Sri Semmangudi's kalpanaswara-s would never leave the listener weary. His lengthy fast tempo swara-s without even one elongated note (deergha swara) is unparalleled and it would be no exaggeration to state that Semmangudi is the only maestro to achieve this  Semmangudi always feels that swara singing should not be a mere rhythmic exercise which will tend to rob the music of bhāva. (V. Subrahmaniam, 2001b)

His brilliant exposition of Kharaharapriya rāga led people to refer to him as Kharaharapriya Srinivasa Iyer. A 1933 concert review sums up his music in the words dignity and depth, facets that forever reign in his music. He held the view that rāga ālāpana should be taught by listening and learning compositions. According to a senior disciple, Semmangudi was:

.. against teaching rāga ālāpana to students by singing phrase after phrase and asking them to repeat them, as if making them learn it by heart. According to him, the students should listen to rāga ālāpana-s by the guru and the other stalwarts at concerts and absorb the concepts, which they should later assimilate and bring out on their own. The more kritis a student learns in a rāga, the wider his perspective, as each piece projects a different facet of the rāga. (V. Subrahmaniam, 2001b)

In his later years, Semmangudi was highly sought after to inaugurate music festivals and functions. His humorous yet kind words in Tamil also pleased the audience and the organisers. It is believed with his blessings, the event was sure to be a success.

Semmangudi left this world on 31 October 2003, aged ninety-five, survived by his three sons and two daughters. The Carnatic music that we hear today has been greatly influenced by his music and his style.   It is fitting that this tribute concludes with some advice from the pitāmaha:

My advice to youngsters, especially male vocalists, is that you should come out and sing only after your voice matures. These days, young children are brought to the stage even before their voice breaks. It may be nice to hear children sing, but it is best to wait till the voice matures.  There is today a lack of devotion. Musicians should be charged with devotion. There should be bhakti towards music. That would liven music and ensure that it endures. (Semmangudi Srinivasa Iyer in Krishnakumar and Ravikiran, 1998)

This article first appeared in Pallavi's T. N. Krishnan concert souvenier brochure.  It was released on the Internet on the occasion of Sri Srinivasa Iyer's 89th birthday and was updated in the birth centenary year of Semmangudi Srinivasa Iyer in 2008.


Go back to the Carnatic Reference Library.