From Prodigy to Master

At the Madras Music Academy's festival of December 1969, the scene was set for a sensational occurrence. A young lad, yet to reach three years, was seated on the stage with the respected Experts' Committee of the prestigious Music Academy of Madras before him. In a playful mood, the boy astounded his audience by identifying over 325 raga-s and 175 tala-s. He further answered technical questions about different types of raga-s, gamaka-s (musical glides and shakes), parts of compositions and nomenclature. The Music Academy Journal writes 'With mikes all around him and his hands full of biscuits, all the time playing, the child gave out correct answers.'

So impressed were the experts of the Academy that they proposed to award him a monthly stipend of 50 rupees for three years. Within a year he had given a vocal performance at the Shanmughananda Sabha in Bombay and by the age of five had a repertoire of about 500 songs. The playful lad was none other than N. Ravikiran.

'Rarely do artistes in the music field live up to childhood promise. On many occasions genius in early years disappears in a flash. Ravikiran, the chitra veena artiste, has consolidated his precocity in childhood to present an image of a responsible player with nothing erratic about him that is normally attributed to gifted persons.' SVK in The Hindu, 12-1-96

The gottuvadhyam, more correctly called chitra veena, is a complicated ancient instrument with twenty-one strings. Unlike the traditional veena or sitar, it is fretless. The fretless nature of the instrument makes it the closest instrument to vocal standards. There are six strings used for the melody with the remaining strings used for providing a drone (3) and resonance (12). The fingers on the right hand are usually used with plectra to pluck the metal melody strings while a cylindrical block made out of wood, teflon or ebony is used to slide along the strings to vary the notes played. Ravikiran is the undisputed master of the instrument.

By the age of twelve, Ravikiran was a full-fledged vocal artiste and was given an A-grade ranking in All India Radio. At around this age, he switched over from vocal music to the difficult chitra veena to prove to sceptics that this instrument was indeed suited to Carnatic music. Within a short time he was a master of the instrument as well. 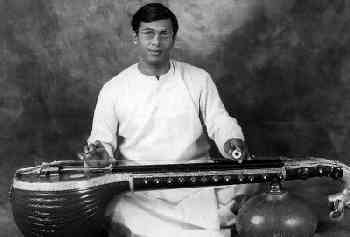 The music of Ravikiran is synonymous with classicism. His unruffled stately manner on the stage is just one sign of his mastery and mature musicianship. He has a dedication to perfection, always aiming to bring out the finer nuances and graces of Carnatic music. Ravikiran plays in the gayaki or vocal style of Carnatic music which features fidelity in sruthi and laya. The austerity, traditional purity, and classicism of his musical style have earned him rave reviews from musical purists. NMN's description of him as a 'Sangeetha Gnani' implies self-reverence, self-knowledge and self-control.

Despite his busy musical schedule from a young age, Ravikiran completed his B. Com via correspondence and has founded the 'International Foundation for Carnatic Music' to advance the cause of Carnatic music. He has written several articles on music and is a composer or merit also. A complete dance drama with music composed by him will premier at the 20th Cleveland Thyagaraja Festival in 1997. Ravikiran has released numerous cassettes and CDs. He has recently collaborated with Blues singer and guitarist, Taj Mahal, and North Indian musician, V. M. Bhatt to produce the highly acclaimed CD, Mumtaz Mahal.

Ravikiran is musical phenomenon, master and genius. Pandit Ravi Shankar summed things up when he said 'If you don't believe in God, just look at Ravikiran.'

Pallavi had the pleasure of hosting Ravikiran and party in 1996.