Even though the Semmangudi style is perceptible in his renditions, Narayanaswami has established himself as a classy performer and an excellent guru. V. SUBRAHMANIAM profiles the vocalist. 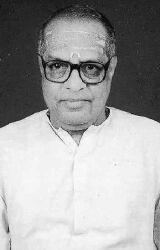 THE SONGS of the great composers of Carnatic Music have been handed down through generations by the `guru-sishya' parampara. The bedrock of our concerts has been the great, unparalleled creations of the Musical Trinity — Tyagaraja, Muthuswamy Dikshitar and Shyama Sastri.

Tyagarajahad the largest number of disciples and they are categorised mainly into three branches — the Umayalpuram School, Thillaisthanam School and the Walajapet School. Dr. Semmangudi Srinivasa Iyer belongs to the Umalyalpuram sishya parampara, having been a direct disciple of Umayalpuram Swaminatha Iyer.

All successful concert artistes do not necessarily possess the ability to teach the art, but Dr. Semmangudi Srinivasa Iyer has been a past master in both the aspects. He has a large number of disciples who have blossomed into concert artistes as well as good teachers. P. S. Narayanaswami is one of the most prominent among them. Known as Pichai to close friends, Pichai mama to youngsters and his students, and as PSN to a few others, he is hardly known by his full name. He is so popular as a teacher of music in Chennai that most of the young musicians of today would have had a period of training under him. Certainly, this speaks volumes about his capacity and reputation as a great concert teacher.

Born on February 24, 1934, at Konerirajapuram, to Dr. P. N. Subramaniam, a medical practitioner, Pichai exhibited his talent in music at a very tender age and his parents put him under Thirupampuram Somasundaram Pillai, a nagaswaram vidwan, for his music lessons. PSN made rapid progress and later came under Sangitakalanidhi Mudikondan Venkatarama Iyer, and then under Semmangudi Srinivasa Iyer.

Under the gurukulavasa system, he joined Semmangudi in the early 1950s. PSN had started giving concerts, both public and through All India Radio, at the age of 15. It is interesting to note that no one else from his family took to music; his brother is an engineer and sister a medical practitioner.

Pichai moved over to Chennai in the second half of the Fifties and soon established himself as a classy concert artiste and a teacher of high order. Blessed with a powerful voice, Narayanaswami absorbed the special aspects of the music of all stalwart musicians of the last century, carving out a style of his own, even though the Semmangudi style was clearly perceptible in his renditions. As his voice responded very well to fast tempo music, his style became `briga' oriented. His grip over tala and rhythm has been commendable that he has the felicity to handle intricate pallavis with ease and dexterity. He has had the privilege of being accompanied by stalwarts of the last century such as, violin maestro Pappa Venkataramaiah and mridangam Palghat Mani Iyer for his concerts.

PSN's own students, who have made a significant mark on the concert platform, comprise a large number. This list consists of not only vocalists but also violinists and other instrumentalists.

PSN served All India Radio, Chennai, as a conductor of the Vadya Vrinda, and he is accredited with a number of symphonies. Setting to music a number of compositions is another aspect of his musical virtuosity. `Tiru Arutpa' was set to music by him and this was presented by him at a recent conference of the Music Academy, along with his students.

Narayanswami has been the recipient of many awards and titles. He received the title, `Bala Gana Kala Rathnam' when he was just 12 years old. In 2000, he was conferred the title, `Sangeetha Kala Acharya' by the Music Academy. The `Padma Bhushan' awarded to him by the Government of India this year comes as a crowning glory.

Pichai is a very friendly person by nature. Anyone who comes in contact with him would feel close to him. His public relationship is something to be highly appreciated. He is a person full of humour, adept at cracking jokes and playing friendly pranks without being offensive.