Blend of melody, rhythm and intellect

She retained the quality of freshness in her music till the curtain came down prematurely, not on her music, but on her life, on October 31, 1990. Yesterday, July 3, was M. L. Vasanthakumari's 75th birth anniversary day. Her disciple, Sudha Ragunathan, shares memories of her guru with 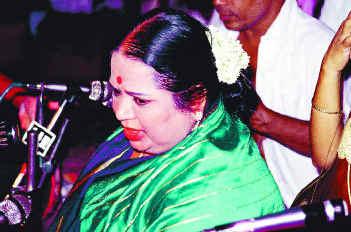 THE LETTERS M AND L that normally would have functioned as initials to a name could well have been acronyms to describe M. L. Vasanthakumari's music. Definitely, M can be interpreted as melodious and L as lilting for, true to her name, Vasanthakumari's music was like Spring — joyful, colourful and varied. She retained the quality of freshness in her music till the curtain came down prematurely, not on her music, but on her life on October 31, 1990. For, her music continues to live and Vasanthakumari, if alive, would have turned 75 yesterday. Vasanthakumari was born in 1928 at Madras to Koothanur Ayyasami Iyer and Lalithangi. Her illustrious lineage ensured a musical environ. The atmosphere at home was constantly reverberating with the songs of Purandaradasa, the kritis of the Trinity and others, and khayals, thumris and dhuns rendered by visiting Hindustani musicians. Madras Lalithangi Vasanthakumari — this was how a Sabha announced her name for her `solo' concert in Bangalore in 1941. The 13-year-old was substituting for her mother who had taken ill. But the `substitute' was far from a compromise.

On the contrary, she created a tremendous impact on the minds of all her listeners. While many admired her, there were some proud of her too. Amongst them was G. N. Balasubramaniam. Her guru and mentor, GNB taught MLV for ten years. He advised her to absorb all the good aspects of his music but to cultivate her own style. MLV did just that and the `MLV bani' emerged that was a combination of melody, rhythm and intellect. She stunned the audience by making unfamiliar ragas familiar and lacing known ones with new contours. With great alacrity she would just shift the tonic note to another swara and out of this exercise would emerge a kaleidoscopic portrayal of a new raga, another one and yet another. Her Ragam-Tanam-Pallavis were cerebral.

Sudha Raghunathan, one of the leading torchbearers of the MLV style, reminisces: ``In all my twelve years of learning under her, I had never seen Amma practising at home. But, to my great surprise, she would compose a Pallavi in the car on the way to the concert!" MLV's earlier marathon practice sessions must have stood her in good stead for she was anything but lackadaisical about her concerts. Her constant refrain was that those who wished to take up music as their career, must be totally dedicated.

Within a short period of time, MLV attained the status of a star performer and though younger in age was accorded a place of honour as one of the members of the female `Trinity,' along with M.S. and DKP. By 1946, she had become a playback singer as well. It goes to the credit of MLV's music that she earned the admiration of even male stalwarts.

While mridangam maestro Palghat Mani Iyer, in a rare gesture, accompanied her in concerts, Hindustani maestro Bade Ghulam Ali Khan was generous in his praise for her music. Sudha says, ``Amma has told me that it was Bade Ghulam Ali Khan Saab who taught her the nuances of Sindhu Bhairavi in the Hindustani style." Adding to MLV's achievements in terms of awards and honours is the fact that she popularised Purandaradasa's kritis. Her rendition of Tiruppavai gives the month of Margazhi its special flavour.

MLV also created a legion of students many of whom she taught for free. Sudha says, ``As a teacher she had two sides to her. One, where she taught in a structured manner, and the other that she adopted for advanced students like me. I was never taught anything in the strict sense of the term. She would sing and I would notate the songs. I learnt a lot on the concert platform sitting beside her strumming the tambura and later singing along with her. In the initial stages, my repertoire was limited and believe it or not, she would draw up her song list based on what I knew! A benefit of this kind of training was that there was no room for laxity. Sometimes she would deliberately say something that would have the positive effect of motivating us. If I didn't know a particular song that she wanted to sing, she would remark with a slight tinge of sarcasm, ``Oh! So you haven't learnt this yet?" The very next day, I would be ready with the song. At her sixtieth birthday celebrations, it was an ailing but proud MLV who beamed happily at the large number of students she had shaped.

But MLV, on her part, always gave the credit to the talent of her students with the words: "I haven't done anything. They have come up because of their talent and hard work." Sudha remembers, "On one occasion, when some songs had to be recorded, she did not have the time but rather than let go of the opportunity she suggested that a student of hers could sing it instead, and it so happened that the choice fell on me." MLV was a woman with a golden heart. Sudha Raghunathan recalls, "I have never heard her talk ill about anyone. Amma had no petty qualities. She respected other styles of music and advised us to imbibe the best aspects from them. Talking about her large heartedness, I can cite several incidents. How can I express her magnanimity when on a trip to London, she took me to a BBC interview? This was at a time when I was just providing vocal support for her. I also had the privilege to be asked a few questions.

``Another instance was when during my very first trip abroad with her, some local organisers wanted to have a solo concert of me. She not only agreed willingly but also offered her accompanists — Kanyakumari and Mannargudi Easwaran — for my concert. It goes to their credit, that though they are both senior to me they agreed to do so at that point in time."

MLV's generosity extended beyond her students. Several were the benefit concerts that she gave and the spontaneous help that she extended. A true student of GNB in more ways than one, MLV shared a deep bonding with her guru till her last day, October 3, 1990.

Concludes Sudha, "When I visited her in the hospital, during her last days, she said, `Sudha can you hear my guru singing — `Avarudiya kural evvallavu ganeernu irukku!' Naturally, I couldn't hear anything."