He never played to the gallery 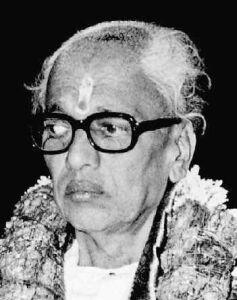 IN 1944, Justice T. L. Venkatrama Iyer, speaking at Dikshitar Day celebrations at R.R. Sabha, deplored the habit many musicians had of singing at the speed of the boat mail. This train, popular with those travelling between Madras and Kumbakonam, was the 1940s' equivalent of the present day superfast trains. One musician against whom such a criticism could never be levelled was the late M. D. Ramanathan popularly known as MDR, whose 80th birth anniversary was observed recently.

MDR was the only son of Manjaparai Devesa Bhagavatar. Although he majored in physics from the Palghat Victoria College, music was his first love. He had his early training in music under his father. In 1944, the year T. L. Venkatrama Iyer criticised musicians who sang at breakneck speed, MDR enrolled in Kalakshetra for the Sangita Shiromani course. The principal of Kalakshetra at that time was Tiger Varadachariar. MDR's entry into Kalakshetra was to mark the beginning of a guru-sishya relationship between Tiger and the tall, lanky young man from Palghat whom Tiger had interviewed at the time of admission.

While Tiger was equally at ease singing in madhyamakala and vilambakala, MDR confined himself to vilambakala, a tempo that suited his bass voice. While he excelled in every aspect of manodharma sangita, MDR never played to the gallery. He never indulged in excessive swara-singing and a sense of proportion was the hallmark of his kutcheries. He confined himself to ragas replete with rakti.

This writer has particularly enjoyed his Todi, Reetigowla, Kedaram, Hamsadhwani and Hindolam. His rendering of the Tyagaraja kriti, "Samajavaragamana," in Hindolam was unique. He would start the saranam with words "Sama Veda", although in the original version the saranam begins with the word "Veda". When asked him he added the prefix "Sama" "to the word "Veda", MDR with a twinkle in his eyes said, "Well, for one thing I'm a Sama Vedin. More important Lord Krishna Himself has said that of the four Vedas, He likes the Sama Veda the best."

His music was soul stirring and reposeful. Since he had an excellent knowledge of Telugu, he savoured every word in the sahitya. His vilambakala singing was a delight to his fans. MDR was a composer too and has written more than 300 songs in Tamil, Telugu and Sanskrit. His Kadanakuthoohalam tillana was especially popular among his rasikas. His Bhageshree composition, "Saagara sayana vibho" has been immortalised by KVN. His mudra was "Varada Dasa", a tribute to his guru Tiger Varadachariar.

MDR was awarded Padma Sri in 1974. But the Sangita Kalanidhi never came his way. Many of his admirers were keen that he should have been conferred the title in 1983-84. That did not happen and he passed away soon after. But what was a mere award anyway when to his rasikas he was a Sangita Kalanidhi?

MDR did not have mass appeal, but he had his own band of committed rasikas who admired his total involvement in nadopasana.