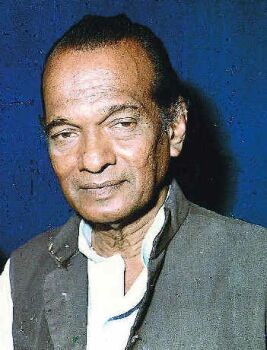 KRISHNANAND WAS a pundit with a difference. He hardly showed off his deep knowledge of Hindustani music, teaching a host of disciples with a care which fathers bestow on their sons. Born as Narasimha Rao, in 1920, he belonged to Akola in South Karnataka, and learnt first from Sri Mahalingam, a teacher of deep knowledge. Followers of Hindustani music and its growth in South India know that Abdul Karim Khan and his Kirana Gharana style of music found new roots in the court of the royal house of the Wodeyars in the princely state of Mysore in early 20th century. The proximity of Maharashtra and its tradition of music to Karnataka helped the seeds sown by Abdul Karim to flower in many ways. Gurus of repute settled in Hubli and Dharwar, and later moved to Bangalore. One of them, belonging to the Panchakshari school, Pundit Bheema Rao, taught the Kirana style of singing to Krishnanand when he was still a youngster. That sound foundation stayed with him, until he became a teacher much later.

Krishnanand's early years in Madras were spent as a make-up artist in the famous Gemini studios. While he earned a living thus, his musical instincts were simmering to come to the fore. Informal sessions with friends made many aware of his mastery of music. But he remained little known until he was "discovered" by the mridangam and vocal vidwan TO. V. Gopalakrishnan. With the zeal to prove that Carnatic musicians can master Hindustani music as well, he approached Krishnanand to teach him.

The serious and unassuming pundit who never encouraged people to address him as one, finally found an outlet for his love for Hindustani music. Recalls TVG : "My classes were after 9 p.m. when both of us were free. My respected guru, Chembai Vaidyanatha Bhagavatar, was a witness to my lessons with punditji, making sure that it was well worth my while".

"A year later, TVG performed with M. S. Gopalakrishnan on the violin and Sheik Dawood on the tabla. The occasion was graced by Governor K. K. Shah. A milestone was reached by all the artistes involved in this event. But most of all, it established Krishnanand as a guru of great merit.

Among today's leading musicians who went through arduous training under Krishnanand are M. S. Gopalakrishnan, V. V. Subramanyam, and Trichur Ramachandran. I recall his quiet ways and his unassuming personality. Clad in white kurta-pyjama, and a black waist-coat, he would come by bus or auto to his disciple's home, spend hours teaching, and later, doing the marathon rehearsals or `riaz', accompanying the singer on the harmonium.

He would explain in detail the nuances of each raga, and never fail to extol the classicism of Khayal singing, where the artiste elaborated a raga for an hour in gradually rising tempo.

He was a prolific composer of what is known as `bandish' — the core composition which allowed improvisation by the singer.

Adept at Thumri singing, he encouraged it in all its subtlety, but had his reservations about ghazal singing. Like a wandering minstrel, Krishnanand served Hindustani music's cause in Chennai by going to his students' homes from dawn to dusk, teaching them with the love and care that made them respect him as a true guru. "He was generous, giving all, as a teacher. In my concerts of Hindustani music he sat next to me on the stage, encouraging me and motivating me.

He was truly a `Karma Yogi', not expecting anything in return for what he selflessly taught hundreds of students..." says a visibly upset Trichur Ramachandran, upon hearing of Krishnanand's sudden passing away.

Many musicians of repute in the Carnatic music world enlarged their vision by learning from Krishnanand, including M. A. Sundaresan and M. A. Krishnaswami. Vidya Shankar has been a keen votary of Hindustani music in Chennai for long, and a supporter of Krishnanand and his music. She has been a live wire of the Krishnanand Music Circle.

The Tansen Music festival was conducted by Krishnanand right from the 1970s, wherein not only his disciples but also other North Indian classical musicians were featured. In all public events such as festivals, Krishnanand took a back seat, and let the music speak for itself.

T .V. Gopalkrishnan's AIMA honoured Krishnanand in its December festival of 2000. Such honours sat lightly on him. Perhaps, he cherished most the affable Chembai Vaidayanatha Bhagavatar's gesture of honouring him spontaneously during a concert at the Bharatiya Vidya Bhavan, for, the greatest compliment an artiste can get is from one who understands the greatness of his music.

Chennai has lost a sincere and selfless guru. Krishnanand's disciples will do well to continue their `riaz' to keep his work alive, and bring more people to appreciate Hindustani music in these rather changed times when more parochialism in the arts have taken deep root.