Distinctive presence in the music arena 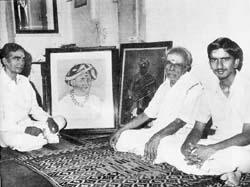 The birth centenary of Lalgudi Gopala Iyer, a musician and teacher par excellence, is being celebrated on June 18. G. DWARAKANATH on the multi-faceted personality.

AS HIS children and grand children get ready to celebrate the birth centenary of Lalgudi Gopala Iyer - or Santhanagopala Iyer to give his full name - one thought stands out - the deep debt of gratitude society owes this family for zealously preserving a heritage that cannot be evaluated in terms of gold but which on the other hand, gives people an equally priceless gift - joy.

Sarngadeva, Vidhyaranya, Ramamatya and a host of others are venerable names of those who fostered the growth of music, but it is almost exclusively to Purandara Dasa that we owe the current Carnatic music. Among other things, he revised and built the basic infrastructure on which Tyagaraja, Syama Sastri, Muthuswami Dikshitar and others raised such magnificent mansions, that now every other system of music in the world can be looked upon as an aspect of Carnatic music.

Only a few of Purandara Dasa's original tunes have come down to us in authentic form, like the pillari geethas and suladis but a majority of the songs are known only through oral traditions, that are often subject to whimsical changes. However, the Trinity's compositions have been well preserved thanks to two factors - the development of a system of writing notations and devoted generations of disciples.

One such distinguished disciple of Tyagaraja was Lalgudi Rama Iyer whose sons Valadi Radhakrishna Iyer and Guruswamy Iyer, grandsons Madurai Kandaswami Bhagavathar and Lalgudi Gopala Iyer, and great grandson Lalgudi Jayaraman and his sisters, and their children, have preserved uninterrupted this unique heritage with astonishing devotion.

Gopala Iyer was born in June 1900 as one of the two sons of Valadi Radhakrishna Iyer. The elder son, Kandaswami Bhagavathar, lived in Madurai to be able to practise his profession better and he earned enough to keep his mother and brother Gopala Iyer in the village in relative comfort.

Gopala Iyer was studying in the high school when there occurred a turning point in his life. He suffered from a serious illness, identified as jaundice. Medical and other treatments had failed and his health continued to be precarious.

At that time, his brother Madurai Kandaswami Bhagavathar was close to an ascetic, Sadguru Swami Gnanabhodananda. One day, the Swami told Kandaswami Bhagavathar that Gopala Iyer was ill and should be brought to him. Following this, 16-year old Gopala Iyer was brought to Madurai where, as he sat before the Swami, he felt his illness disappearing and his body getting back to normal.

This, as well as the constant demonstration of the Swami's healing and spiritual powers made Gopala Iyer decide to stay on with the Swami. He left Madurai with the Swami and his family lost track of him. A worried mother did her best to find her son but failed. After 7-1/2 years, a classmate spotted Gopala Iyer in Kallidaikurichi. On learning of this, his mother went there, and met the Swami who readily restored him to her. Back home, he was married and settled down to raising a family.

The time he spent with the Swami gave Gopala Iyer a unique detachment that stood him well in later years. Having learnt music earlier from his father and brother, Gopala Iyer taught it to eager learners. Subsequently, he formally started a school in Lalgudi where he trained any number of boys and girls. He trained his own children, Jayaraman, the only son, three daughters and grand-children the family heritage of music.

Violin was introduced in Carnatic music in the earlier years of the 19th Century. Lalgudi Gopala Iyer and his elder brother, Kandaswami Bhagavathar were both good violinists and had accompanied all the great vocalists of the time.

Gopala Iyer was a versatile musician. Not only the violin, he could also play other instruments. One of his daughters was specially trained in playing the veena.

Gopala Iyer could be said to be an example of the findings of the latest research in the West - classical music greatly enlarges the mental faculties of the learner in most other fields as well. He was a successful horticulturist, and could effortlessly outwit his opponents in games like carrom, chess and card playing. He could make beautiful dolls that adorned the Navarathri Kolu.

Continuous creative activity is the life sustaining force of any art. Gopala Iyer did not forget this - he added his own compositions some in rare, unused ragas like Uthari, Sudha Tharangini, Velavali, Gandharva Manohari, Bhuvana Mohini, Sindhu Kriya, Megha Ranjani and Niranjani. Many of these songs are to be rendered at a special concert on June 18 at the Krishna Gana Sabha Chennai.

Gopala Iyer passed away in Madras in 1979 where he had shifted in 1946 to provide better prospects for his son, Jayaraman, who has become an all-time great in Carnatic music. Jayaraman He says he owes his success entirely to his father - the pure tradition and strict discipline. Jayaraman's two children, G.J.R. Krishnan and Vijayalakshmi (both violinists) and his three sisters, Padmavati Anantha Gopalan (veena), Rajalakshmi Radhakrishnan (violinist) and Srimathi Brahmanandam (violinist), Jayanthi (veena) daughter of Rajalakshmi, and Srimathi Brahmanandam's children, Anuradha Sridhar (violinist) and Sriram Brahmanandam (mridangam) are all performing artistes who have made their indelible mark in music.