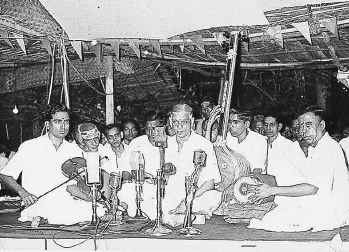 GNB - THESE three letters weave a web of magic in the minds of Carnatic music lovers. As long as he lived - he passed away on May 1, 1965 - he was the uncrowned Prince of Carnatic Music. His style, his knowledge of music and his brighas have made him a legend.

My father, Sri Devakottai Narayanaswami Iyer, was a close friend of GNB. How this friendship blossomed makes an interesting story. One day, sometime in the 1930s, my father's friend (Karaikudi Muthu Iyer, the mridangam vidwan, if memory serves right) visited him. Sri Muthu Iyer mentioned about Mani, an honours graduate in literature, son of the headmaster of the Hindu High School. He went into raptures about Mani's voice. He wanted my father to meet him and listen to him and it was decided to implement it the same evening. GNB at that time lived in a house on Singarachari Street, Triplicane. Accompanied by another friend, Babu (C. K. Venkatanarasimhan) Sri Muthu Iyer and my father made the visit. Asked to sing a song, GNB sang a piece in Kalyani and according to my father, who himself was the first disciple of Sri Ariyakkudi was mesmerised by that rendition. Thus started a friendship among the three that continued till GNB breathed his last.

GNB, in his concerts, tried several permutations and combinations and would indulge in Sruti Bedha extempore. This was a gift, which came naturally to him. His brighas were electrifying, to say the least. Once in the hall of hundred pillars in Srirangam, he kept an enlightened audience like Chembai and others spellbound with his masterly alapana of Jaganmohini. When the kirthana, "Sobillu" was finished, Chembai is said to have exclaimed "Oh, Indha Pillayandan kshemama irukkanum" (``Long live this young man"). Such was the greatness of GNB that till his death musicians and music lovers used to flock to his performance. He was also a great teacher and his disciples included the great MLV, Radha Jayalakshmi, T. R. Balu, T.S.Balu, Thanjavur Kalyanaraman and Ragini.

The friendship flourished. In fact, whenever he saw something good and worth being possessed, GNB would buy it and present it to my father and Sri Babu. He had once gone to Calcutta for a concert. After the concert was over, the Bengali gentleman who arranged the concert was so happy he presented GNB with a huge tin of Badam Halwa.

GNB brought it straight to Madurai (since he had a concert at the Madurai Music Academy a couple of days later) and gave it to me saying that I would like it. After the shooting of the film, "Udayanan Vasavadatta" was over, in which GNB acted as Udayanan opposite Vasundara Devi, he presented the veena which he played in the film to my father. Incidentally, my mother was an excellent veena player and he thought she could use it. It is being preserved as one would cherish an heirloom. Another such treasure is a wall-clock which reminds us of GNB when it chimes.

GNB had the courage and humility to prostrate before Ustad Bade Gulam Ali Khan in the Music Academy in the true traditions of Thyagabrahmam who sang "Entaro Mahanubhavulu, Antariki Vandanamulu". If Shakespeare had been alive today, he would say, "Nature might stand up and say to all the world `Here was a musician when comes such another'"?